Original illustrations & paintings will be on display,
along with art, posters and t-shirts available for
purchase. 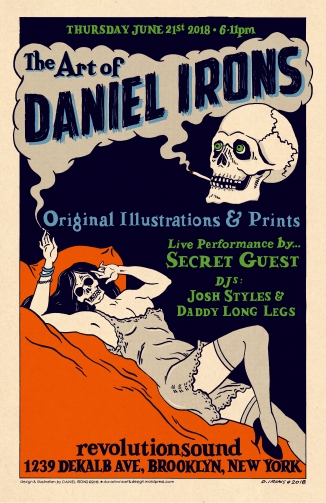 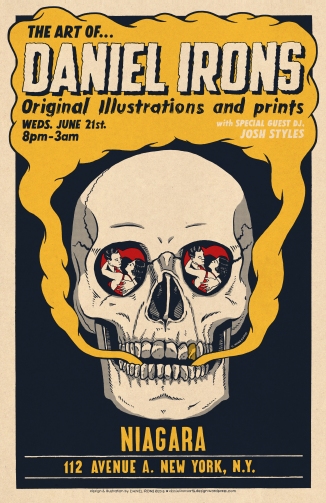 Original illustrations & paintings will be on display, along with art, posters and t-shirts available for purchase.

Daniel Irons was born in Sydney, Australia in 1972. He’s a Visual Artist and Designer best known for his evocative, high-contrast illustrations and posters and hand-painted signage. His visual style is informed by a lifelong passion for classic mediums like sign painting and lettering, vintage tattoo art, and antique design, as well as outsider mediums like trench art, folk art, and graffiti.

Growing up between Melbourne and Sydney, Irons learned techniques such as drawing, screen printing and painting at a young age from friends and family. According to Irons, there wasn’t much to do at the time so he embraced creativity as a means of escape and survival. Later, music would likewise become a lifelong passion and a major source of inspiration for his work. To this day, much of his work is for events related to rock and roll and punk.

He has worked professionally as an Art Director in Fashion and Photography and was a part of various campaigns from the likes of Max Mara, Salvatore Ferragamo, Richard Avedon, Steven Klein, Solve Sundsbo, Aurther Elgort and others. Recently, he’s been designing cover art and posters for underground musical artists (Dirty Fences, Daddy Long Legs, Murphy’s Law, and Kid Kongo and The Pink Monkey Birds), various festivals (The Race of Gentlemen, Meltasia Music Festival), branding and menus for bars and restaurants (Sea Wolf, St. Mazie, and The Grand Victory), as well creating original work for the Harley-Davidson Museum and independent films.